A significant new report shows that the capabilities of Newmetrix’ AI-powered safety platform are very much in line with the direction construction safety trends are moving. Dodge Data and Analytics is known for its yearly reports on key areas of construction technology and risk. From their annual report on BIM to regional construction outlooks and green building trends, they have firmly established themselves as a respected independent analyst firm, gathering data to understand current best practices and where the industry is headed. The most recent Dodge Data & Analytics report is on safety, an in-depth study of AEC safety trends and the fifth that they’ve issued since 2012. They surveyed 282 contractors — half of which were general contractors — and found that the construction industry is still as deeply engaged in safety as it was in previous studies.

Encouragingly, as Dodge writes in their press release announcing the report, the study “points to the likelihood for wider adoption of a data-driven approach” to safety. Contractors identified several technologies as most likely to improve safety in the future, including predictive analytics and visual monitoring with artificial intelligence (AI).”

The future of safety is data-driven

And a significant proportion of contractors, especially those with more than 100 employees, see data-driven approaches as the future of safety: the category receiving the most support of large contractors (32%) said that identifying the projects most at risk of an incident in the next week would strengthen their safety programs, and 28% said the same about making better use of the project and safety data that they already collect. When asked to name the top technologies that they thought would positively affect worker health and safety, predictive analytics and visual monitoring were AI both showed up in the top five.

In fact, within three years, the survey data indicate that the share of contractors using these technologies will triple, and that’s not surprising given the benefits that they experience from strong safety management. Many of their responses are those one would expect, such as reducing recordable injury rates (73%) and workers who are more willing to report unsafe conditions (75%). But they also clearly see business benefits as well. An overwhelming majority of contractors said that investments in safety enable them to negotiate better insurance terms (78%), improve their ability to bring in new work (66%), see improved performance from trade partners (66%) and increase worker retention (61%).

In our experience, the power of predictive analytics amplifies these benefits. Newmetrix customers have been able to reduce their recordable incident rates by as much as 50% or more, and major insurers have expressed strong interest in our systems. In fact, The Hartford is paying for pilot projects for some of its customers. 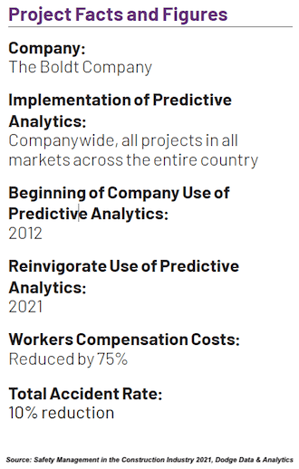 The report describes in depth how three different contractors are managing and improving their safety processes, and one of them — The Boldt Company, a Wisconsin-based general contractor — is using Newmetrix’ safety observations and analytics platform to reduce safety risk.

“There’s a mind shift in the company that we’ve helped to encourage with data and reporting tools,” Trevor Hietpas, manager, Insights and Analytics with Boldt, said in the report. “In the past people looked at safety as a series of unique events, but there are variables that influence it and they are common from incident to incident. Our recent and future investments in software are about broadening the search for those variables.”

They’re early in their predictive analytics journey, having deployed early this year, but the results are already strong. According to the Dodge Data report, Boldt has seen a reduction in high-risk, high-impact incidents, which has helped reduce worker compensation costs by 75% and cut their total recordable incident rate by 10%.

It’s exciting to see the Dodge study confirm what we’re seeing in the market, which is that leading companies are increasingly using multiple sources of data — from observations to manpower to photo analytics — to better measure and predict safety risk. The results are more efficient use of safety resources, reduced incident rates, and better treatment from insurers.