Hawaiian Dredging is the largest contractor in the Aloha State and a top 200 Contractor as ranked by ENR, but, despite its name, the company doesn’t do much dredging these days, even though that’s how the company got its start. More than a century ago, its first job was to dredge the entrance to Pearl Harbor. Today, Hawaiian Dredging has a vast portfolio of work that ranges from high-rise buildings and resorts to medical facilities, highways and defense facilities.

Many of its employees have worked together for more than two decades, so safety isn’t just a compliance issue for Hawaiian Dredging. It’s personal. The contractor wants to do more than reduce its incident rate; management wants bring the number of incidents down to zero. In pursuit of this goal, Hawaiian Dredging is always looking for ways to strengthen its safety culture and better understand how to reduce risk.

The journey to Predictive-Based Safety

Hawaiian Dredging started using Newmetrix to assess safety risks earlier this year, but the story of how the company came to rely on the insight of our AI, “Vinnie,” begins two years earlier, when it first adopted StructionSite to automate their site documentation process.

Hawaiian Dredging previously used terrestrial laser scanning for site documentation, but the equipment was heavy and images were difficult to share. To overcome these challenges, the company turned to StructionSite, a software solution that enables construction companies to take 360 degree site photos that are then automatically tagged with their location and position on drawings, which makes them easy to access. Employees can choose a location on the drawings and then scroll through the timeline to see a series of images that show how the site has changed over time.

When Hawaiian Dredging met with Newmetrix, they realized that they could easily feed the images they’d collected from StructionSite into Vinnie to achieve Predictive-Based Safety, which would help identify projects at highest risk for safety incidents and provide recommendations on actions they could take to prevent them from happening.

The company deployed the Newmetrix Safety Monitoring module of the Safety Suite in early 2019 on a hotel renovation project that it had taken over from another contractor. Hawaiian Dredging needed a precise understanding of the state of the project, and so it was using StructionSite a couple of times a week to take about 200 photos each time. As a result, they had thousands of photos, and these were complemented by additional images taken onsite with cell phones using the Newmetrix app.

Vinnie analyzes each image to identify not just safety hazards — such as a folding ladder propped against a wall or a trade worker not wearing a helmet or gloves — but also good safety practice, such as housekeeping.  The goal of the program is not to bust individuals for safety violations. Instead, Hawaiian Dredging wants to understand site risks, how these risks change over time, and the measures management can take to lower risk. 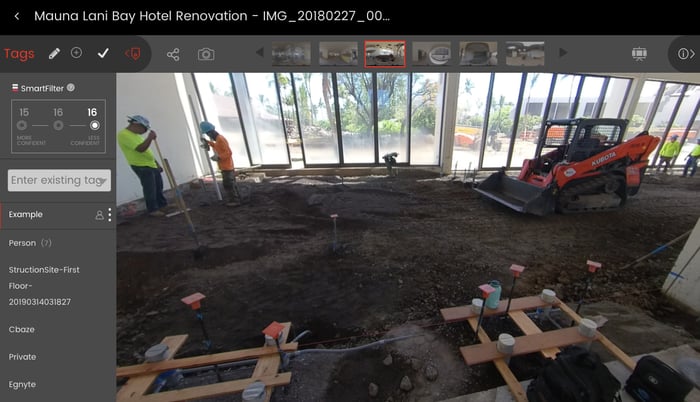 “In the past,” said Chris Baze, BIM Manager for Hawaiian Dredging, “we had to walk the site every day to obtain this kind of information. With Vinnie’s analysis, these pictures tell a story, as the dynamics of the jobsite come alive even for remote staff.  We can now understand how seriously workers are taking mandated safety precautions, and whether we need to offer more training.”

Integration with StructionSite could hardly have been easier. After StructionSite takes photos, Egnyte (a cloud storage and file sharing service) grabs the image files. Newmetrix then pulls them all from Egnyte.

“It literally took five minutes to set up,” Baze said, “and we haven’t had to touch it since.”

Hawaiian Dredging is far from the only construction organization that’s benefiting from the synergies between Newmetrix and StructionSite. Barton Marlow is also gaining critical safety insights from a similar setup, though in their case, they’re using Box to store images where Hawaiian Dredging is using Egnyte. The result, though, is the same. Newmetrix’s analysis of automated 360 degree images that were originally captured for site monitoring can enable Predictive-Based Safety, which reduces site incidents by an average of 30%.

That’s a huge step in the direction of zero incidents, where everyone goes home safe every single day. In a close-knit organization like Hawaiian Dredging, it’s impossible to place too high a value on that.